Process of Carlos' work with an artwork 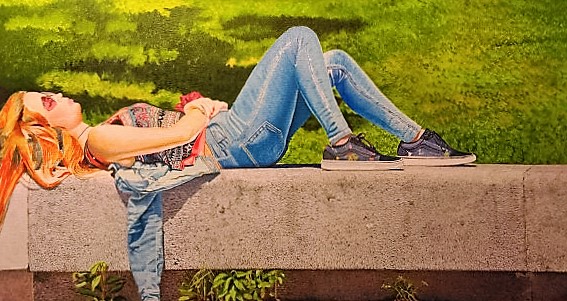 The reality is the one that causes any type of reflection and interpretation. To take it, it is only a question of analyzing the relation that exists between this one and the degree in which she has to be articulated as vehicle of expression. In this fact, there exists, of inexorable form, a motive that bases the contents that, on having been recreated modify the universe of the intentions.
In this reality, there is situated quite all that is known and it is possible to perceive, for what the personality when the real world is interpreted in a faithful way, depends on the attention that the painter puts in the search of elements.
Aspects of the aforesaid thing, they were and they continue being stones on which the painting has been constructed along the history that, far from considering his influence exhausted on the emotions, the reality guards corners

In this line of work, we find the work of Carlos Marijuan, an author who knows well the meaning of these words, while it has been this power of the recreation, a commitment taken by him up to the last consequences in his way to understand the existence.
Where a simple door turns out to be an icon developer of internal worry; where the chromatic game of light filtering between the foliage, explicit declaration of serenity is done.
Of there that the observer could find in every work biographical sketches that the look knows and the reason raises to a plan of poetical situation, while the pleasure does not slip by as argument of expression beyond the described thing.